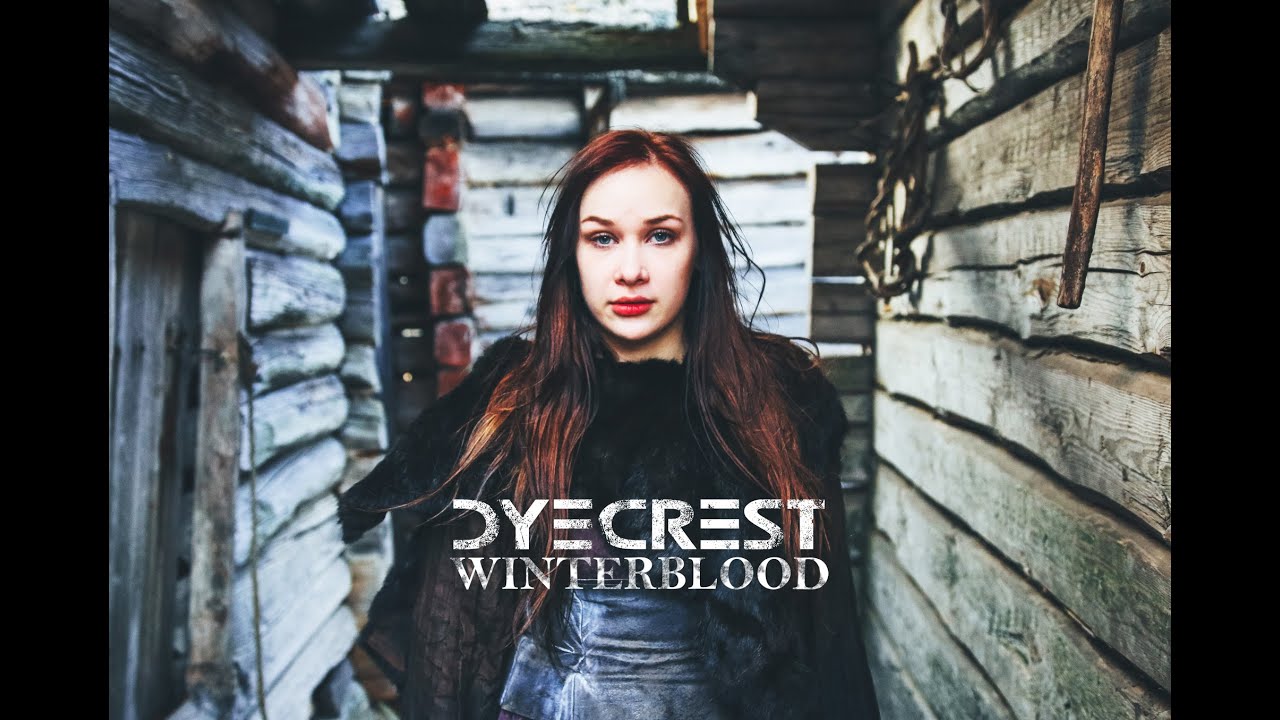 The original song can be found on the album Are You Not Entertained? (2018, Inverse Records), says Dyecrest drummer Niko Takala.   Winterblood’s acoustic version was recorded by Teemu Velin (Stam1na etc.), mixed by Miitri Aaltonen (Stam1na, Mokoma etc.) and mastered by Mika Jussila (Nightwish, Stratovarius etc.). The song’s lyrics are based on a Finnish fantasy book Talviverinen (Winterblood in English, the book is not yet translated) by Helena Waris.

The director Leutola has co-operated with Waris already earlier, when Leutola filmed a short film based on her books.   – I got to know Saara through Helena back in the days. As a band, we started to work with Saara on our video Fading/Reaching (2018). Now we have kinda three artistic visions of the same source combined here in the video of Winterblood, comments Takala.   Leutola and Waris have been talking about making more short films and/or tv-series, even movies based on Waris’ books.   – And this discussion was in a way the “fire starter” to the acoustic version of Winterblood.

Saara and Helena asked us to “create something out of Winterblood that could be used on a soundtrack or something”…   – Luckily, we decided to do it. The original version of the song is great, of course, but I think we managed to capture the spirit of Winterblood even better in the acoustic version, states Takala.   Winterblood was filmed completely in outdoor locations. The actors/actresses on video are Peik Carpelan, Pilvi Mäkeläinen and Minni Lilja. More than 20 persons took part in the crowd funding of the video.   – We are enormously grateful for each and every person who were involved.

This participation made the whole video – which is most of all our and Saara’s tribute to Helena’s mighty books – happen! Takala says with gratitude.   Dyecrest is currently recording a new album, scheduled to be released in 2021. At the moment (in July 2020), six songs are done when it comes to the drums, bass and the rhythm guitars. The sessions are continuing in early September.

SEPULTURA with David Ellefson at the Sepulquarta Sessions

TWISTED SISTER launches “Live At Wacken: The Reunion” on YouTube

JOHN DIVA & THE ROCKETS OF LOVE release new single and...

SEPULTURA with David Ellefson at the Sepulquarta Sessions

TWISTED SISTER launches “Live At Wacken: The Reunion” on YouTube

Bon Jovi releases new “Do What You Can” Video

Amber Mendes - August 26, 2020 0
Jon Bon Jovi wears facemask and salutes some NYC Workers in new "Do What You Can" Video Bon...

JOHN DIVA & THE ROCKETS OF LOVE release new single and...